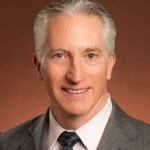 Robert Eldred has been a practicing financial advisor since 1991. He started with IDS Financial, later to be known as American Express Financial Advisors (AEFA). It was here that he developed his financial planning skills, and where he earned his CERTIFIED FINANCIAL PLANNER™ certification. In 2000, he took on the additional role as Office of Supervisory Jurisdiction (OSJ) Branch Manager, serving as Compliance Manager to six AEFA advisors.

Prior to working as a financial advisor, Robert spent ten years in the consumer finance industry. He first managed the FinanceAmerica branch office in Portland, OR, and was later promoted to Area Director, where he supervised ten branches in Texas, Oklahoma, and Louisiana before returning to the Bay Area to supervise offices in California, Oregon, and Washington. It was while working in the consumer finance industry that Robert first realized the critical importance proper long term financial planning plays in achieving financial independence.

He holds a Masters of Business Administration degree from the University of Portland (1985), and a Bachelor of Arts degree in Economics from the State University of New York at Buffalo (1980).

He is very happily married, and enjoys travel, reading, photography, and the performing arts.